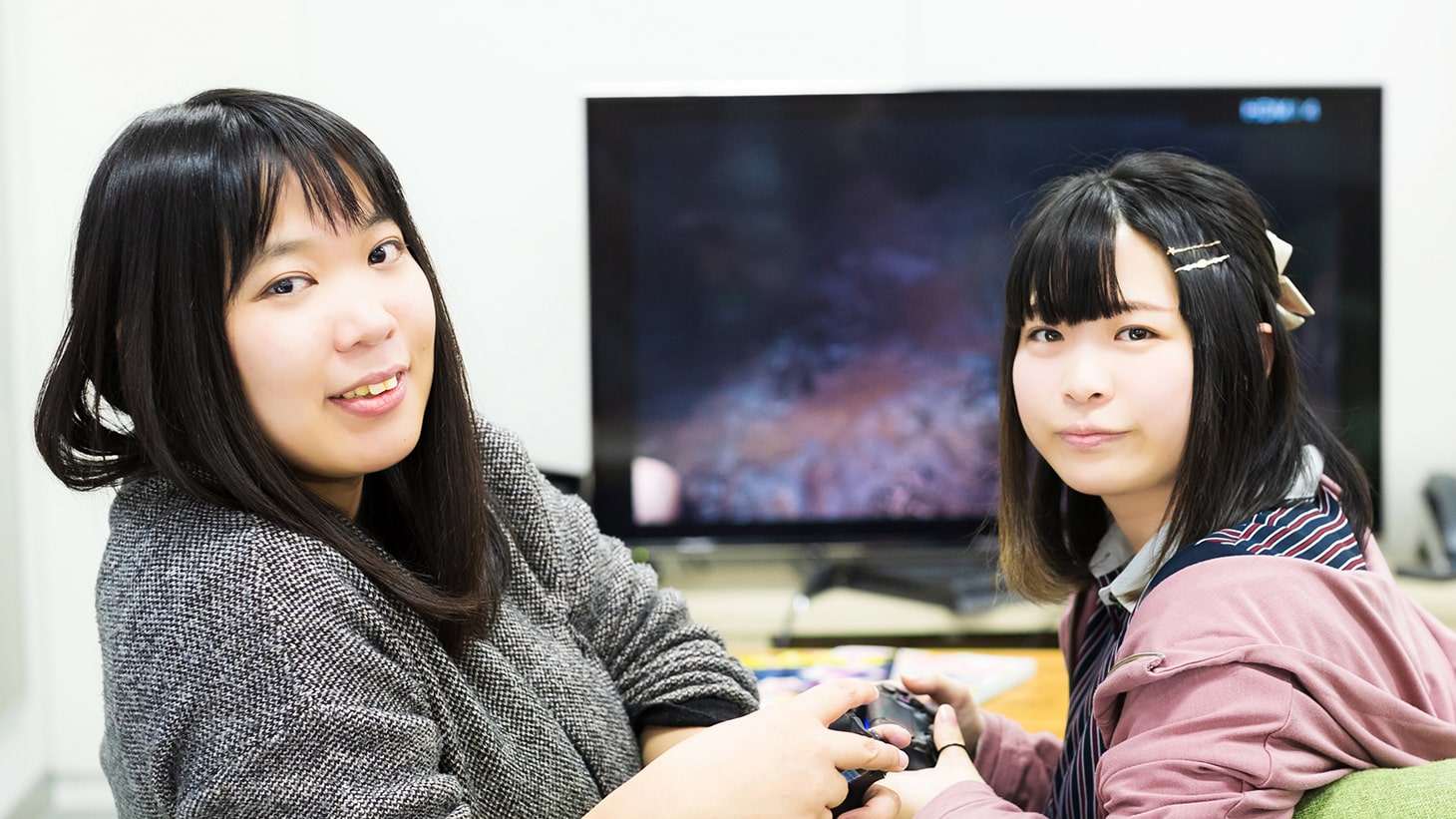 Haruka（left）
After graduating from the Game Programming Department of Tokyo Technical College, I joined Soleil in May 2018 as a mid-career employee. I’m currently in charge of player gameplay for a title in development.

Fu（right）
After studying circuits and programming in the Department of Electronics and Information Engineering at a technical college, I worked as a system engineer at an IT company, working on server-side development of web systems. Before joining Soleil, I had no practical experience in game development. I study software engineering every day, and I really love cats.

Why did you want to get into the game industry?

Haruka：Originally, when I was choosing a programming school, I wanted to learn through the games that I enjoyed. I learned about the fun of game development through creating a game, seeing the reactions of those playing what I created, and taking that feedback to create an even better game. Doing this made me feel like working in the game industry.

Fu：For me, it’s because this industry has a community whose voice can truly be felt. I started out as a programmer because I simply liked creating things, but as I got more involved in system development, it became more important for me that people experience what I create. So, I decided to switch jobs to focus on studying for the game industry, which I have always loved and cannot separate from my life. 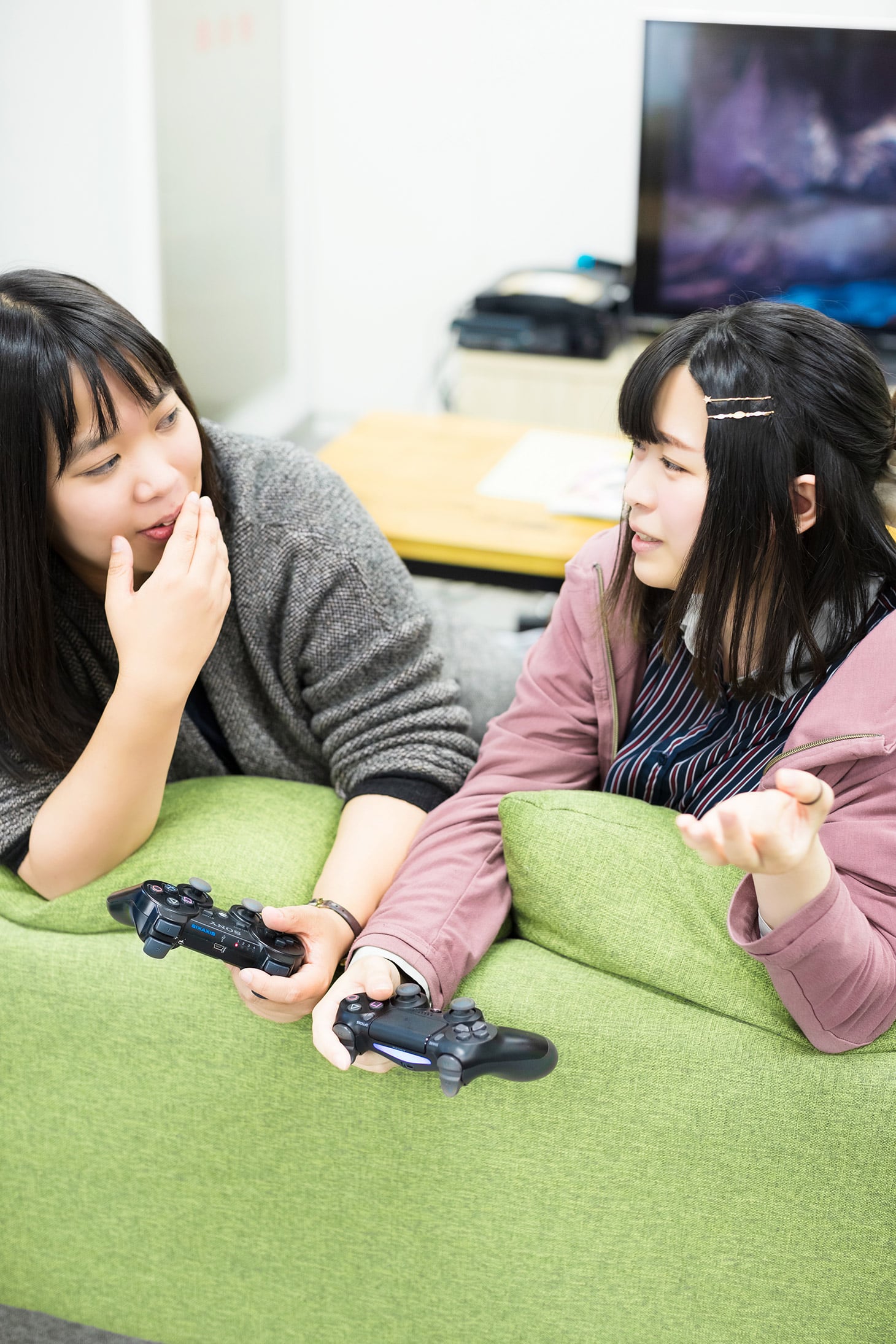 Fu：When I found out about Soleil during my job search, I was surprised at how quick the company’s response was. It took less than 10 days from application to hiring. During my first interview, I talked to an engineer at Soleil and learned that they had senior engineers in a wide range of fields, including networking and graphics. I decided to join the company as this was a great opportunity to improve my technical skills.

Haruka：In my case, I didn't have many opportunities to try new things at my previous company, so I decided to change jobs and joined Soleil because I was interested in being involved from the start of a game’s development cycle.
At first, I oversaw UI-related work, so I did not have much experience in other areas of development, including game design. However, by attending our in-house game development seminars I’m able to expand my knowledge and better take on those new challenges!

Fu：There are a lot of veteran developers at Soleil, and there are a lot of people who are willing to help you take on new challenges, so I feel like it's an environment where young people can learn as long as they're motivated.

Did you have any concerns or difficulties with working in an industry where there are few women?

Fu：I feel like someone that attended an all-boys' school, as I’m not too worried about the lack of women. That said, we have a relatively high percentage of female artists in the same office, so it is not so severe of a gap. The fact that the women's bathroom is relatively empty is also a positive point. (laughs)

Haruka：Not only at Soleil, but I've never felt any particular inconvenience with a lack of women. Even though there are a lot of shy people, once you talk to them, they are all very kind. The veterans are also always willing to listen to you as well. 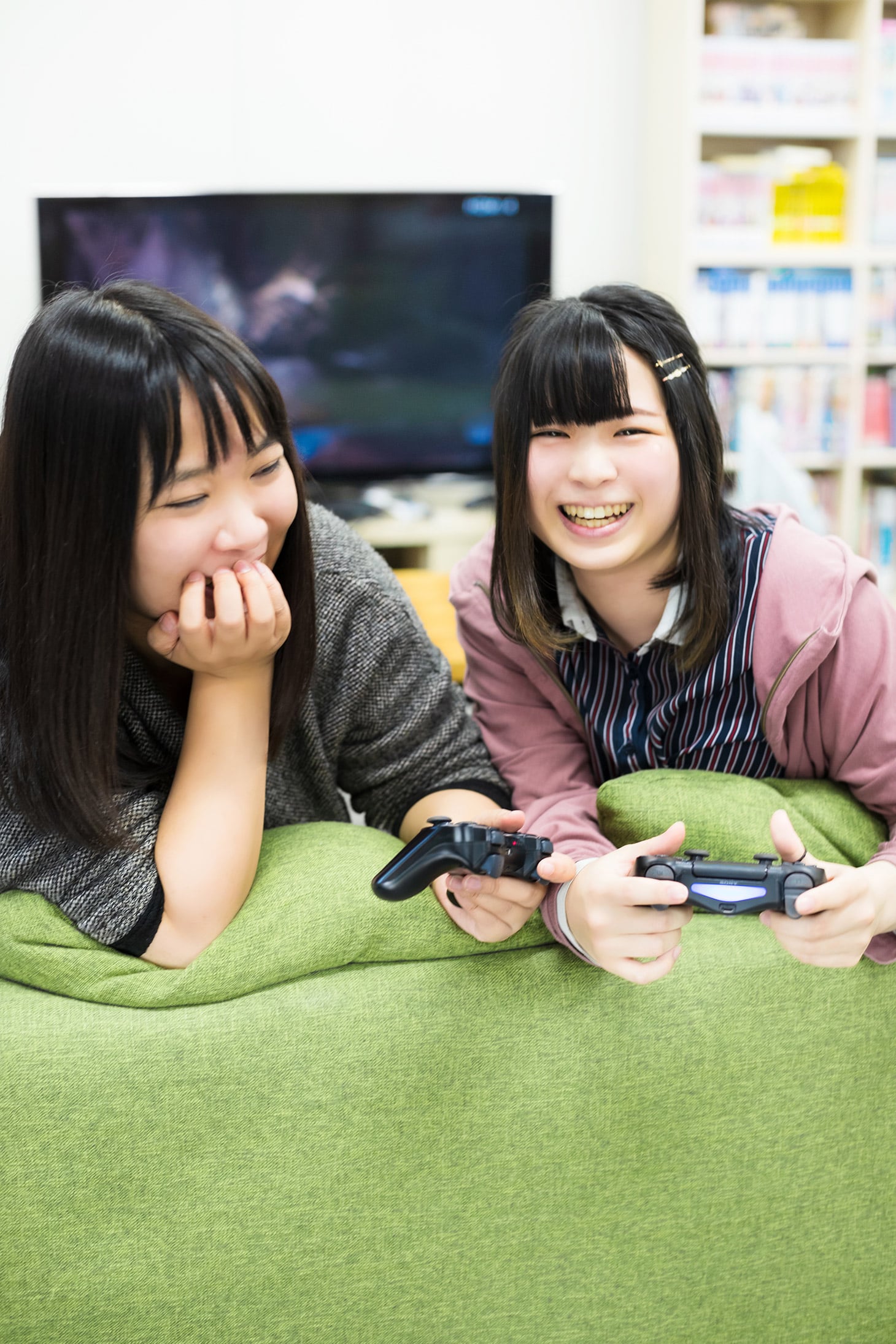 What kind of change do you expect to see in the future of the company and the game industry at large?

Fu：With games themselves being fun, compelling, and thrilling, it’s a shame that game development is mostly seen in a negative light. I feel like this gap between a game and it’s development is decreasing these days, but I hope that this negative image disappears in the future.

Haruka：I think the game industry will continue to grow, in terms of technology, with the arrival of new hardware. I'd also like to have more opportunities where veteran developers can share their skills whether it be through our in-house seminars or some other means.

What is your goal for your job (making games)?

Haruka：I think that action/battle design is one of the most important aspects of a game, so I want to continue challenging myself on this aspect to make games that players feel are truly fun. I am still inexperienced, and often need the help of the more veteran members, so I would like to absorb their skills and more actively participate in study seminars to grow.

Fu：In the future, I'd like to be in charge of art design and drawing. I'd like to not only learn from experienced engineers within the company, but also participate in outside seminars to further deepen my knowledge. I think games only exist because of the players, so I'd be happy if players could notice the games I've worked on as well as the parts in-game that I've worked on.